Hey y'all, currently in the process of creating the Definitive Version of my game and then sending it off to move on to other projects. The goal of the definitive version is thus:

.Rework a lot of the main story and improve it overall with edits to dialogue and the like

.Add new bits of content throughout the game, plenty more items and skills, and a ton of new mechanics and edits to how fights work

.General bug improvements hopefully but qa is slow and I'm adding new stuff so plenty might break that I'll have to fix, thank you for your patience

.Reworking the second town of act 2 to generally be more meaningful and better connect to the story, really hone in on aspects I'm a bit more educated on and also giving the townspeople there sprites separate from people of a different part of the continent

.Adding in random small bits and bobs to reinforce stuff and give a bit more foreshadowing and intrigue

.And overall just generally improve all the acts and the postgame(patch notes noting most all changes to come will come with said patch), as well as a new postgame dungeon that will foreshadow what I'm next working on:

Lost Omen Aurethia, the next game in the LoA series!

This will be a much bigger game made in the MZ engine and will be a side scroller turn based combat game this time. No offense to the ABS plugin at all but there's definitely some limitations that I've really faced and I want to hone in on a different type of rpg to see what fits. Besides, I love FF6 so the side scroller rpg is fun to me :). I won't likely be working with anybody as opposed to the first game(not gonna say no if anyone at all wants to contribute), at least besides getting friends to help with QA, but I'm hoping I can really realize what the game will be. It'll be of quite a big scope and will take a long time to work on so that's why I wanna see this game off with a bang to let y'all have something to chew on while I work :)

Little teaser for what it'll be, but the game will take place across a few locations: The Tower(placeholder name till I think of one I like), Anca, and Antea. If you look on the big map given to y'all in the postpostgame of LoAeroja, this area is in the middle of the ocean as the center island to a chain of volcanoes around it. It is home to a group of people who know much about the world and how it came to be where the rest of humanity is clueless, and Aurethia our protagonist is one of those who lives here.

Through circumstances Aurethia is forced from her home and ends up in Anca along with a few others. Here she discovers the Relles, once a massive group of people brought to but a few through the arduous trials to arrive as a result of the actions of a certain man...Anca is the rightmost country in the upper left continent on the map, split between the volcanic wastelands and the less active but still volcanic woodlands. It's the highest point on the continent, to get to the other countries nearby there is at least a mile or so of cliff you must face.

And at last Aurethia will arrive in Antea, the desert right next to Anca and of which harbors the man that did such harm to the Relles as to force them from their homes, much as she was. Antea is a land with a checkered history, from a long forgotten past to the era of the three clans to a republic and at last to the current Monarchy. I'm extremely excited to explore this because Antea is the land in Loa I've put the most time towards, having far over 300 pages of lore n backstory for many things within, and this particular time within it's history is a turning point that will mark the future of the continent.

And did I mention...the game is over 1000 years in the past from Aeroja's time?

Yes, in fact, this takes place in a time long ago in the world's ~2600 year old history.

There's so much I want to explore of this world and so much I'm excited to bring to life with Aurethia's story, but for now I must wrap up Aeroja's and leave it in a place where I'm happy and content. I'll have a lot more to talk about with Legacy of Aeroja when I finish the definitive version and then leave a postmortem patch. In the meantime, I'll leave you with a little teaser image of our protagonist Aurethia and I hope you all have a good day.

Well cause the image didn't seem to load, err, here 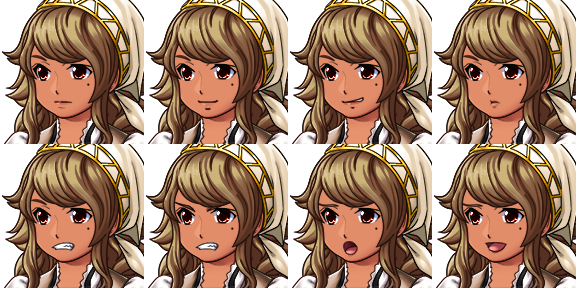